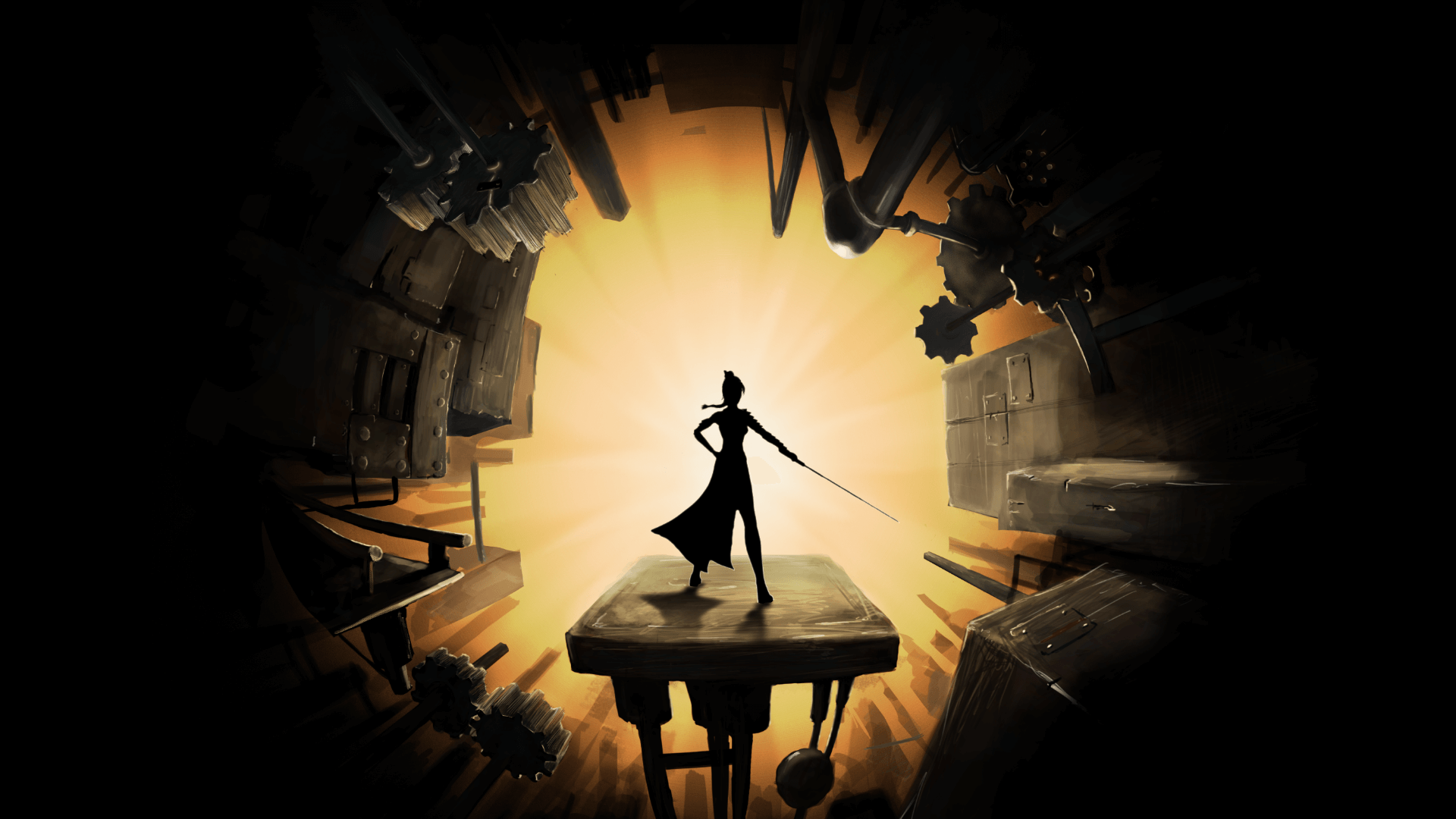 Intro:
In your mind's eye, you're five moves ahead of The Dungeon. It's been a grueling trek through this particular floor, and - as always - you're one false move from oblivion. Having played the scenario through in your head multiple times, you slide forwards across the tiles. The monsters hunt around you. The Darkness encroaches.

Walls move. Stone floors become abyssal pits. But you're safe! Everything goes exactly as expected... Almost. There's one other thing you needed to take account of. Something you couldn't control; something unpredictable. The other players. What do they have planned?

Review:
A fantasy-style board-game-cum-computer-game that isn't an actual board game. If that sentence sounds intriguing, you'll likely enjoy this. If it also sounds confusing... Take that feeling and run with it, because in The Living Dungeon there's plenty to be confused about.

At it's heart, this little British indie gem is a turn-based, multiplayer dungeon crawler with a heavy emphasis on tactical combat and character placement. The entire experience is presented as a table-top board game, not dissimilar to Advanced Hero Quest (for those of a certain age, that's your cue to get excited). Dice rolls, unfair Games Master and the lot.

For fans of CRPGs, you can choose to have the characters and environment presented as an actual isometric dungeon, with everything shown graphically as you would expect in this type of game. Alternatively, if you want to relive the days of yore with all your friends crowded around your mum's kitchen table, you can play the full game in 'Tavern' mode. Options are there to make the characters appear as static playing pieces, the dungeon is represented by flat playing tiles and when you roll the dice they bounce around the table in their full simulated glory. These two modes of play are purely an aesthetic choice, and both have pros and cons. I prefer the dungeon mode, however the game plays the same regardless of your preference.

I mentioned confusion before; well when first starting our there's plenty of it. For those lacking in friends who you're able to invite around to your house to enjoy the offline multiplayer (you really should get some, as that's where the game shines the most), there's Xbox Network support for online shenanigans, but it's not the same as having people in the room with you, giving it that real board game feel. Alternatively, there's the single player.

The first half-dozen or so levels of the single-player 'story' mode act as a tutorial for the game mechanics. The dice rolls and AI are fixed, designed to ease you into the experience before the dungeon lets loose with it's full range of options designed to kill you. Even with the tutorial though, some of the mechanics remain vaguely explained, and at times you can feel as though the game is being rather obtuse. Because of this, casual players may find themselves turned off, with everything feeling random and unexplained. This is a shame, as when everything falls into place you begin to realise how expertly crafted those underlying mechanics are - especially when playing offline against friends, assuming you can squish up to NINE people in your living room. Projector optional.

Whether playing through the story, or enjoying one of the fully customisable multiplayer modes, the basic gameplay remains the same:

You begin by selecting a character as your playing piece from a selection of around ten. This character will have a certain special skill which is unique to them, and they may also (depending on the game mode) have specific types of dice which you can roll during your turn. In some modes, you can choose your own dice, and your choice governs your character's unique skill; regardless, you'll always have five dice to roll at the start of your turn.

The dice depict various symbols rather than traditional numbers, each of which allows a specific move or action. There are also multiple types of dice: Agility dice, event dice, attack dice and general (mixed) dice. The character you're playing as and the dice you roll combine to create a unique tactical experience for each person playing the game. For example, on an agility die there will be more chance of rolling a footprint - this allows you character to move one space in the dungeon. A player who has three attack dice may have less of a chance of moving very far, but more chance of rolling a sword or crossbow icon, used for melee and ranged attacks respectively. You use your dice to kill the dungeons monsters, possibly kill the other players, and make your way to the dungeon's exit. You can also collect cards which have various gameplay effects and can be played before your turn (e.g. move other players, swap your dice, etc), and gems can be collected from dice rolls or Dungeon Master events which are consumed by choosing, once per turn, to re-roll unwanted dice.

You couldn't be more wrong.

The dungeon is made up of a selection of tiles, which form rooms, traps, walls, doors and connecting corridors and pathways. Every tiles is split up into a set of 3x3 squares, which make up those walls, doors, pathways etc. On the reverse of those tiles are other routes, rooms and pathways. Certain dice rolls allow you to rotate, flip and swap the tiles around, rearranging the dungeon as you go.

After all the players have finished their turn, the Dungeon Master - an invisible, omnipotent overlord - gets to roll his own dice, flipping and rotating the rooms of the dungeon, adding new monsters and moving those already on the board. He also controls The Darkness - a swirling mist of death which surrounds entire tiles, moving and spreading around the board - and Shadows, mysterious black statues which kill a character upon contact. The best thing about that? The Dungeon Master (DM) can be player controlled when not playing story mode. Once again, Hero Quest fans rejoice!

Without wanting to turn this already lengthy review into an instruction manual, I'll just say I'm only scratching the surface of the range of options here. All dependent on dice rolls, as a character you can attack other players and monsters, cleverly manipulate their position on the board, rearrange the dungeon to leave them literally hanging above the void below, force them into enemies, pits, traps, walls, Shadows and the Darkness... The range of options are jaw-dropping, and allow for some clever plays.

Once character's unique skill, for example, allows them to use the Dodge die-roll in a unique way. Normally, you use this roll to swap positions with an adjacent character or monster on the board, allowing you to pass by them or move out of danger and place them in it. However, this specific skill allows you to select any square adjacent to your target for you to dodge to, and then select any other adjacent square to put the person / monster you're dodging into. Combine this with a card / skill that allows you to dodge around corners (a little like the Knight's movement pattern in Chess), and something which is generally used to pass someone in a corridor becomes a powerful tool, allowing you to deliberately place people in harm's way, or leaving another player surrounded by monsters and thus leading to their death.

So much death! YOU WILL DIE A LOT while playing this game. Depending on your multiplayer options, you can respawn, but in story mode it sees you replaying the entire mission.

If you end up surrounded by monsters and you have too few attack dice, you die. Occupy the same space as a Shadow, you die. End your turn in the Darkness, inside a wall, over a chasm... You die. Everything in the game is designed to kill you. All attacks kill. There's no HP or health bar - you're simply playing, or dead. Without any 'undo' button, you must think VERY carefully before making your move.

Achievements:
There are a good few achievements which you will unlock simply by progressing through the story. That is... Easier said than done, to be honest. You can boost all multiplayer and most miscellaneous achievements by yourself with a single controller. There's no need to have multiple profiles signed in. Remember, the DM can be under your control too! Guides are slowly starting to appear for these achievements (including my own), but once you get a grip on the mechanics and characters they're easy enough to figure out. The only ones you'll have trouble with are the ones requiring you to play against the AI.

Overall:
Sound like I'm complaining? No, no no. Quite the opposite. The Living Dungeon is a masterclass in tight, balanced game design. The developers have managed to craft an insanely complex set of complimentary systems, which work together flawlessly to provide players with a wealth of options for tactical play. If this game was a board game, with a suitably biblical instruction manual, I have no doubt it would be winning all kinds of awards right now. It would be the Germans' GOTY. Everything from the dice to the dungeon tiles have been thoroughly well designed, and whether by fluke or months of testing, the various elements fit together perfectly to create a unique, mesmerising multiplayer experience. I hope this review encourages more people will get the chance to experience what I have: The perfect fantasy tactical board game, without any of the lost dice, bent tiles and clearing away.

Unbelievably well balanced. Fanatically designed mechanics for satisfying, intelligent play. So much fun. Amazing tactical options. In short: It's fantastic, despite it's obtuseness.