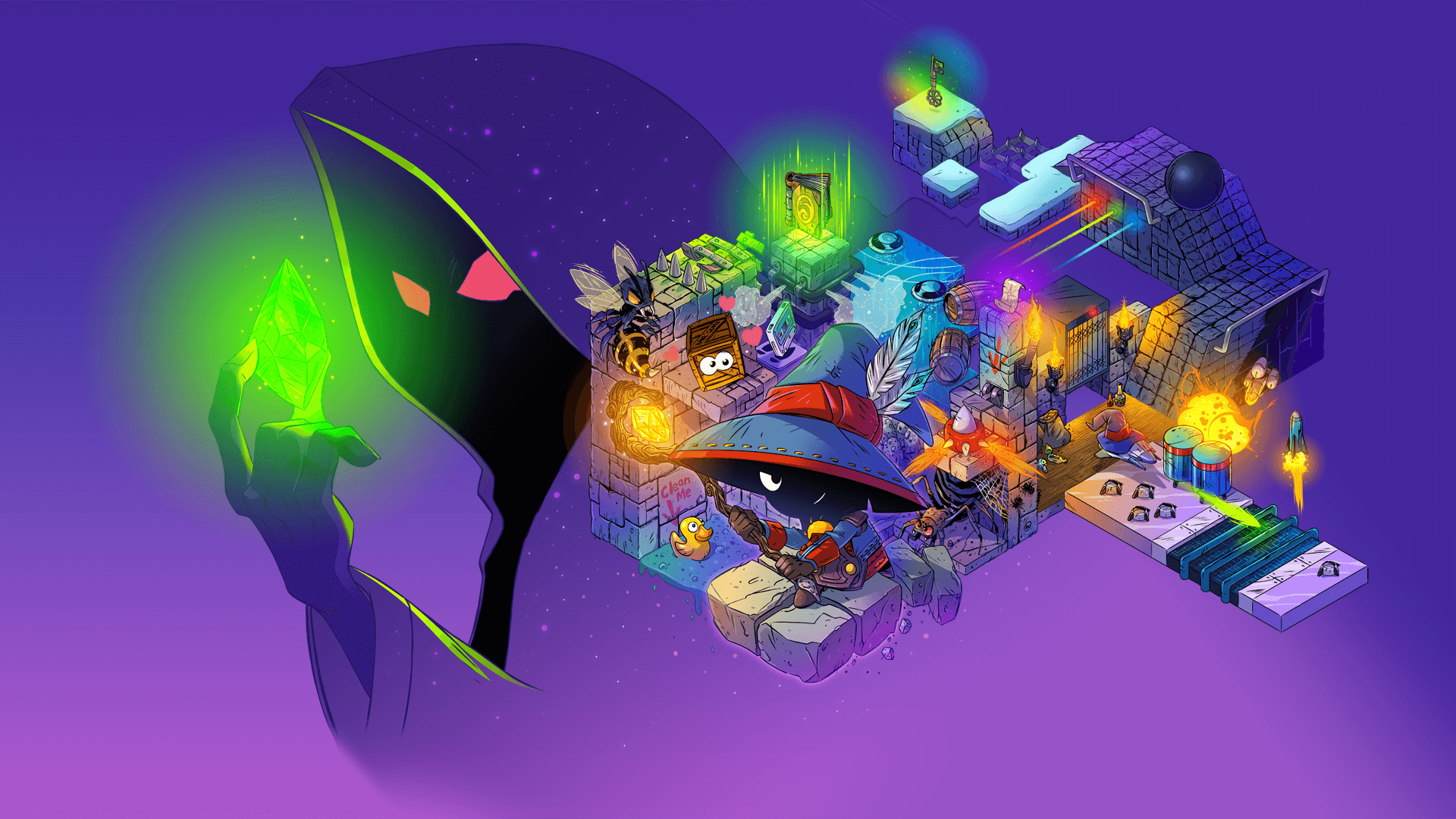 Lumo does what it set out to do with confidence.

Intro:
There’s been something of a trend over the last few years: AAA developers leaving the roost and banding together to do something new, away from the constraints of a huge team and publisher pressure. With titles from other devs such as Fire in the Flood and Dangerous Golf being born under similar circumstances, two things about this current trend are certain: We get people who are ready to let their imagination run wild, and we get teams who have the talent to polish indies to a nice shine.

Triple Eh?, with their maiden voyage, Lumo, are no different – polished, fun, smooth and well executed. In all my playthroughs, I encountered only one bug the whole time. The team at Triple Eh? have outdone themselves.

Review:
The game takes the form of an isometric adventure. That is, an adventure game which uses a diagonally top-down view from a fixed perspective; each room is its own self-contained screen. When you reach the edge of the screen, it loads in the next one. Apart from a few exceptions, this also means each room is its own challenge, so gameplay is constantly rewarding, although the first hour or so is incredibly forgiving – too easy, even.

For fans of the Sinclair ZX Spectrum, Commodore 64 and Amstrad CPC 464, with Lumo you get to relive classic gameplay such as that found in Head Over Heels, Knight’s Lore, Nosferatu and the like. For people who weren’t into that scene, don’t worry, as Lumo brings back the isometric adventure with all the mod cons: Infinite Lives, polished and precise gameplay, beautiful graphics (no, it’s NOT a pixel-art game, and all the better for it).

You play as a cute little wizard, his face hidden from view by his large, brimmed hat, jumping from room to room solving visual puzzles and making steady progress towards whatever his goal may be. Any sense of story is vague at best, beyond the realisation you’re collecting four pieces of computer hardware for reasons unknown.

You leap, jog and swim from room to room across a variety of classic adventure environments: Dungeons, cellars, mines, crypts and castles are all here. Many rooms contain rudimentary puzzles to solve, but Lumo is a platformer at heart: Most of the games challenge comes in the form of making leaps of faith across a variety of platforming tropes, including slippery ice platforms, ledges which crumble under foot, sliding boxes, moving and floating tiles… It’s all in there!

That all sounds very “Been there, done that”, but that is kind of the point: Lumo aims to bring people back to the wonder of the classic isometric adventure, and for once the experience isn’t marred by old gameplay design, it’s all the better for it. In Lumo, there is no dialogue or combat. There are no text descriptions, no pointers and very little hand holding. There certainly isn’t any multiplayer or snapping to cover, and there are no cinematic set-pieces.

If you weren’t there for the classics back in the day, and old-school gameplay brings fear of dodgy controls and unforgiving difficulty to your mind, fear not: The tight precision platforming and constant auto saving are perfect for the modern gamer, and attractive to the casual audience. Slip in and out, taking it a room at a time.

Achievements:
Here's where some of you will be put off, no doubt. You see, the achievements in Lumo are tough. That in itself is one thing, but there's something you need to bear in mind whilst playing: The game uses a single file autosave system. At the end of every gameplay section - or when exploring, with every room transition - your save is overwritten. This makes a HUGE chunk of the achievements missable, and when combined with their difficulty, easily missable.

This can be circumvented somewhat by quickly force-quitting the game before making a transition of finishing one of the arcade sections, but if you miss it, it's gone until the next playthrough. Just something to keep in mind whilst playing.

Overall:
Lumo represents a form of gaming we haven’t seen done well in a long, long time, and Triple Eh? aren’t afraid to mix the old with the new, wrapping everything in a beautifully responsive package, with smooth 3D movement and instant load times for each room. The moment I finished the game, I started a brand new save to uncover the games hidden secrets and stages, which pay homage to classic puzzlers of the past. Praise indeed.

Barring the too easy first half and around two dozen of the games 400 rooms being simple transition areas without puzzles or platforming, Lumo does what it set out to do with confidence.