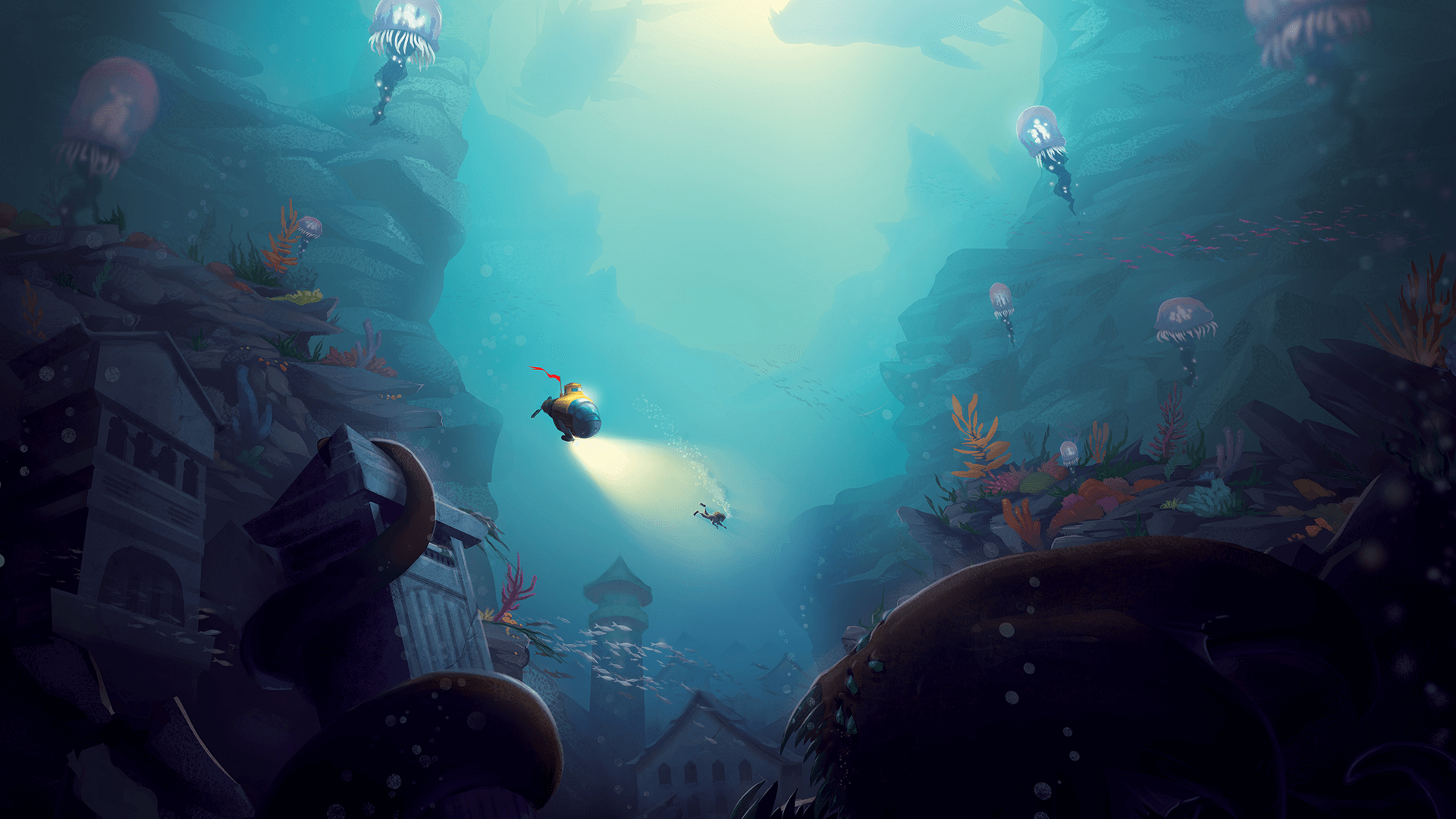 Song of the Deep

The clever live narrative raises it above mediocrity, and the interesting environments will keep you exploring.

Intro:
Insomniac games partnered with GameStop’s then new publishing arm to bring us something with a distinctive Indie flavour: Song of the Deep, a somewhat by-the-numbers metroidvania which takes place entirely underwater.

Review:
Living with her seafaring father, Merryn – a young girl, and the player character – enjoys her simple life in an old hut by the coast. Her father goes out every day, coming back each night to regale her with tales of maritime legends involving mythical leviathans and ancient cities, lost to millennia of ocean currents and salty tides. Through Song of the Sea style artwork (coincidence?) you watch helplessly as her father goes out on his fishing boat one day, never to return. Merryn waits for him, through the chilly night and the following day, before deciding he has been dragged into the depths by unspeakable horrors. She must go out and find him herself – even if it means braving the monsters of the sea to do so.

Luckily for our heroine, she gathers together loads of old junk, incredulously building a submarine. It was at this point I realised my suspension of disbelief wasn’t strong enough to overlook this vital point in the story – the submarine is your vehicle for exploring the depths, it’s central to the game, and I was already at odds with it before the opening animation had played out. It wasn’t that I was expecting a realistic game, it’s just that the whole introduction was so grounded in it’s simplicity, the girl building – from scratch, with her bare hands – a submarine, was just a huge U-turn on the emotional build up before it.

Song of the Deep is presented as an exploratory metroidvania. For those who don’t know, the term metroidvania is a contraction of Metroid and Castlevania – both 2D side-scrolling games which employ one large map rather than individual levels, and you gradually unlock access to different parts of that map as you go along. Other modern examples include The Swapper and Ori and the Blind Forest. The twist here of course is that it’s all under the sea, so rather than platforming you have free reign of the environments. They look quite pretty too, with some really good backdrops of sunken cities and derelict shipwrecks. As you traverse these places of interest, you gradually unlock abilities for your submarine. The first of these is probably the most important: A short-range grappling hook, which you can use to pick up various items to solve puzzles, such as replacing the heads of statues, to open up paths for further exploration.

Attempting to thwart your progress are various hostile enemies of the sea: Urchins which propel spikes through the water to impale you, Jellyfish which sting, and sentient statues attempting murder. Most of these can be clobbered by the grappling hook, but a safer method is to use it to pick up debris and shells, flinging them at the creatures to kill them. The Jellyfish are afraid of the light, so switching on your subs headlamps allows you to skillfully traverse the smacks of gelatinous zooplankton without being killed. Not to fear if you do die however – the nearest checkpoint is never too far away, allowing another shot at them.

One final feature I will mention is also one of the best: Narration. Everywhere you go, every time you collect a new sub upgrade, enter a new area, start a new puzzle or spot a new enemy. Every event is covered by the omnipresent voice of the narrator, her smooth Irish tones providing some much needed company in the foreboding ocean. While other games have done this before (Bastion for example), I’ve never encountered it playing out so naturally, like a live story book. It keeps the emotional connection to the story, of Merryn looking for her father, as well as providing subtle clues to your next objective.

Song of the Deep is a good game, make no mistake, but a few things hold it back from greatness. The level design, while beautiful, is occasionally formulaic and the traditional metroidvania gated progress has been done many times. Combat is dull and repetitive, more of a distraction than a feature, and putting the head on another statue to open another gate can start to feel stale and boring. However, this is balanced with repetition-breaking features, such as the ability to swim outside your sub to solve puzzles, as well as unlocking much needed combat features like torpedoes. Also, a map tracks your progress a la Ori, so you’ll rarely get lost. The voice over does a great job of keeping you engaged in the story, and Merryn’s feelings and emotions.

Achievements:
There are only ten achievements, and most of them are story related. You'll need to do a couple of miscellaneous tasks, but you can go back and do these at a later time if you miss them as you go through the story thanks to the large single map you explore.

Overall:
With a little more focus on original game ideas instead of relying on tried-and-tested metroidvania gated progression systems, Song of the Deep could have been up there with Ori and the Blind Forest. As it stands, it’s a good game and a good example of the genre, but certainly not groundbreaking. The clever live narrative raises it above mediocrity, and the interesting environments will keep you exploring until the end.