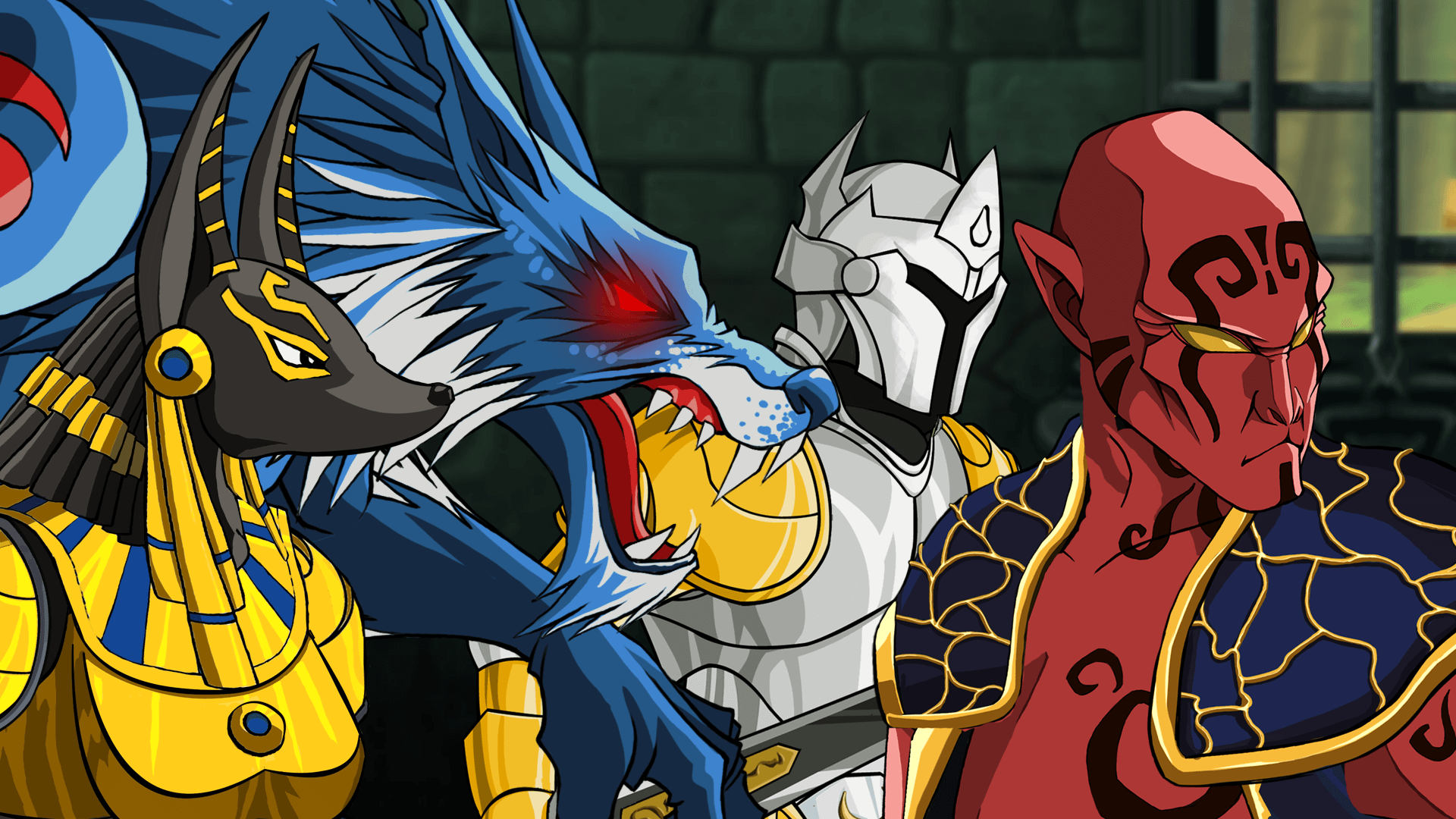 If you like games like Streets of Rage and you enjoy funny writing and leveling characters, then you’ll love this.

Intro:
Dungeon Punks. It’s a terrible name. Not just because it’s so bland and unmemorable, but because it’s misleading in every regard. It brings to mind platforming rogue-likes that Orange Pixel or Ravenous Games might make for your mobile device. It certainly doesn’t bring to mind a highly polished Indie brawler/RPG with addictive gameplay, fantastic multiplayer, great artwork, hand drawn animations and genuinely funny dialogue set in a typical high fantasy world juxtaposed with corporate monopolisation. Just ignore the title, and focus on that last overblown sentence. Because Dungeon Punks is fucking awesome.

Review:
Remember playing fantastic games like Final Fight, Teenage Mutant Ninja Turtles and Double Dragon in the arcades? You and your brother piling 10p coins into a cabinet, arguing over who plays which character? Combine that with three players controlling two characters each, who can be tagged in and out of battle at will, even mid combo or while one character is executing a special move. Place this all into a fantasy setting with mutant player characters and an evil corporation who you’re fighting against, but is also responsible for respawning your team. Throw into the mix an insanely varied set of mounts: I’ve ridden a huge chicken, a gorilla, a tiger and a unicorn. Overlay everything you have above with a class-based RPG system, complete with looted upgradable weapons, unlockable skills, stats and character levels for all six player characters. Finally, sprinkle it with a cynical tale of corporate greed plucked straight from the modern world, and give each PC and NPC personality and plenty of black humour, and set the whole thing to simmer across twelve desperately fun hand drawn stages of combat. That is Dungeon Punks, and it’s practically flawless in its execution.

I had no expectations going into this game. It’s a developer I’ve not heard of, and a title I’d never come across. It took me by surprise just how funny and deliberately ill-fitting the dialogue is, and how excellent the pace, leveling and combat feels. You can tell the developer has gone out to recreate the multiplayer brawler in the best way possible, throwing out what doesn’t work and improving what does. Like my recent review of Maldita Castilla EX, this is a love letter to a gaming genre of yesteryear, but unlike that title it doesn’t set out to recreate it’s inspirations. It sets out to reinvent them, to make them better than they were even then. And it adds so much into the mix, we end up with something really unique.

Contrarily, Brawler/RPGs have been done before. The most recent example which closely matches Dungeon Punks I can think of is Sacred Citadel. That game was good at what it did, and feels mechanically similar to what we have here. However, everything that fell short with that title – the humour, the level design, the loot and skill systems – is expertly executed here. Every stage is markedly unique, from open fields to crystal mines. Enemies have attacks and animations you can learn over time, like Dark Souls, allowing you to become better at a new level after feeling initially overwhelmed. There are a smattering of side quests and mini-bosses to discover as you explore each screen of every stage, allowing opportunities for leveling and looting new gear.

In single player, not only can you tag your partnered PC in and out of combat, you can instantly switch to any of the other AI controlled two-beast teams with the tap of a shoulder button, effectively giving you six very different characters to control as and when you need them. There are Golden Axe style special powers you can call upon when charged with looted crystals, which act as a screen-wide smart bomb hitting all enemies with devastating attacks. Every weapon type has it’s own skill attached to it too, which can be unleashed on the mobs of enemies by simultaneously pressing X+A when charged. Separate from both of those special moves are three magic attacks unique to each character, regardless of the weapon they’re currently wielding. Simple stick and button combinations unleash these on your enemies, and they in turn can be juggled and combined by switching out your current character for your tag team partner, creating some wildly chaotic melees.

Your base of operations is a flying ship in the sky, and here you can sell unwanted loot, buy better gear, level your skills and swap around your tag teams. As you progress through the levels, you collect the souls of your enemies, which are used automatically after each mission has finished – through death, escape or success – to increase the six characters stats. By exploring the levels and talking to the few NPCs dotted around, you can get extra quests which are stage-specific, allowing opportunities for higher leveling and extra gear. If your whole team of six dies during a stage, you are resurrected by the primary antagonist of the game: RezCorp. It’s like life insurance, only it brings you back from the dead rather than providing for loved ones. They take a portion of your collected souls – a heavy portion in New Game Plus – and you respawn back on your ship ready for another try, or to go back to a previous map to grind a couple of levels. To avoid paying RezCorp for bringing you back to life, there are numerous emergency exits dotted around the screens. Taking one means you leave with your souls intact, but when you come back to the level you have to start it from scratch, as everything will have reset, including any enemies killed and all side quest progression. Defeat the boss at the end of each stage to complete it, and unlock the next one in line.

Gameplay is incredibly fun. The combat is as varied as your imagination will allow, and even slicing through regular hordes of fodder is satisfying and addictive. Even playing solo, I found myself wanting to go back again and again to get that little bit further, to beat the next boss and reach the next stage. The writing is good and the humour is great, with real laugh out loud moments. Your characters are masters of combat, but lack a certain finesse when it comes to being charismatic heroes, and the way they stumble through the plot and the reactions of the people they meet is very entertaining.

Achievements:
A bit grindy, but nothing too bad. You will have to complete the game in New Game Plus, so it's going to take at least two full playthroughs to get the 1k from it. You'll also have to level your characters to 40 on the way.

Overall:
There’s very little to be critical of in Dungeon Punks, apart from that terrible title. A couple of the late-game achievements are bugged and the enemy AI can be a little stupid, but a patch is already in the works to fix those things. If you like games like Streets of Rage and you enjoy funny writing and leveling characters, then you’ll love this. For me, the pinnacle of the Brawler/RPG crossover.