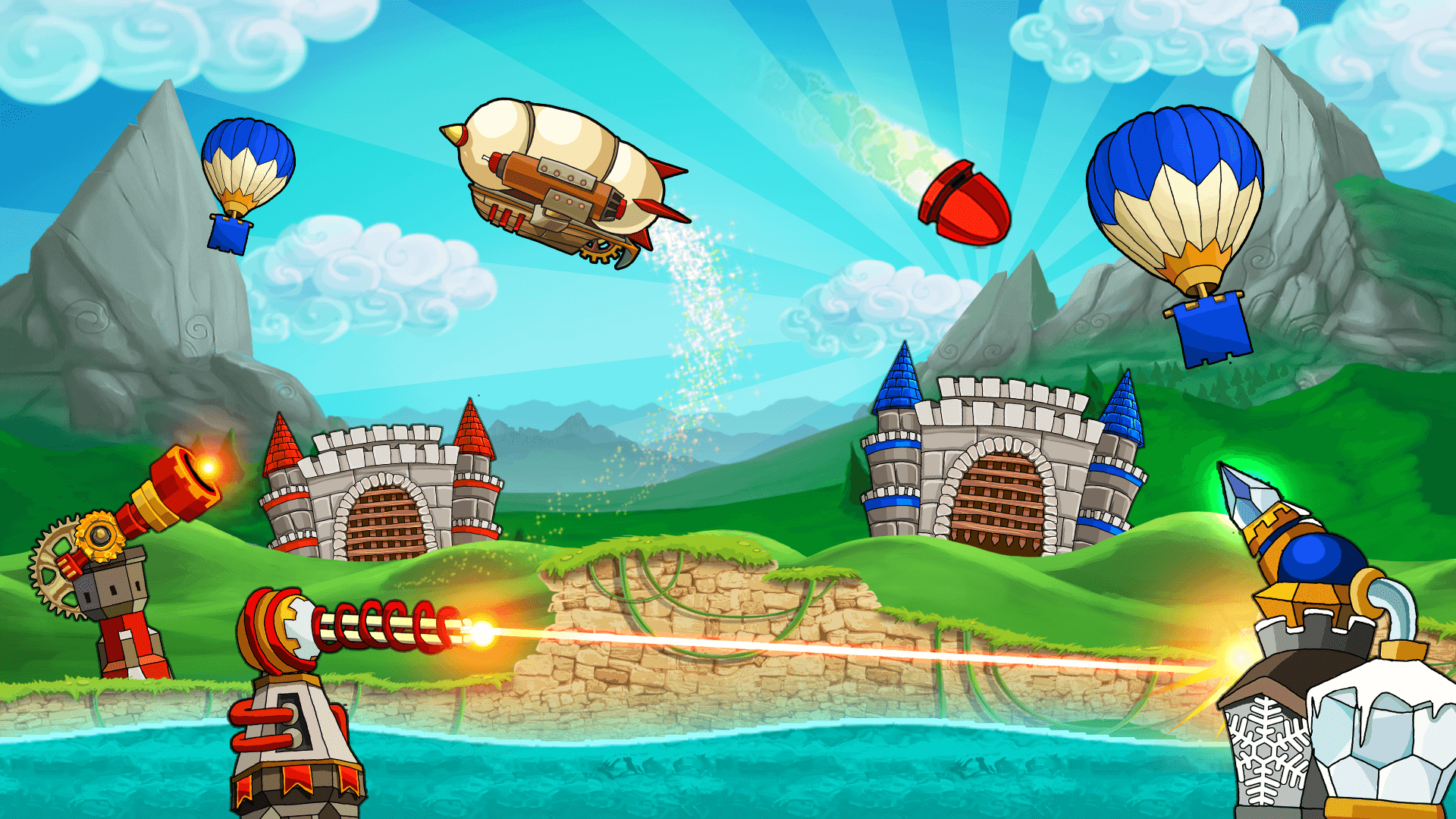 A fun game to crack out when your mates pop around.

Intro:
Way back when, there was an old Public Domain title on the Amiga, simply called “Tanks”. It preceded the concept of Worms, but with only one weapon: The tank cannon. Destructible scenery and multiplayer across random 2D maps was really good fun – Then Team 17 took the concept and made it their own.

Review:
Cannon Brawl attempts to push the Tanks concept through from turn based strategy to real time mayhem. I know, you can’t envisage such a game working with everyone playing at once, but there are some clever systems in play which help the developer to, by and large, pull it off. And you, as the player, are kept engaged; there’s always something to do. You’ll never be waiting around for the other player or the AI to take their turn. There is scope for some strategy, but it’s kept minimalistic with three core concepts: Harvesting resources, defending buildings and firing cannons. Visually it might look like a Worms Armageddon HD mod, but gameplay is more akin to Zen’s underrated Castle Storm title.

Every stage follows a similar set up: You have a 2D cross section of a mountainous landscape, with your castle at one end, and the opponent’s at the other. You both control an airship, which essentially acts as a selection cursor for the gameplay. Across the landscape are pockets of gold, the games main resource. Fly your airship to the castle, order a mine to be built, fly over to a resource and hit a button to drop the mine in place, which will be built over a few seconds. This sees money being automatically collected, which can be used to make other purchases from your castle. Once you’ve got a few gold mines in place, you can fly out and build turrets on any flat surface. These are used to try and destroy your enemy’s castle, or the ground beneath it causing it to topple, and thus win the match.

Cannons start out with a small range, and can be upgraded – by flying to them and selecting ‘upgrade’ – for a sum of your collected gold. This enables them to hit farther and harder. Of course, your enemy will be pursuing the same, and you will often have to battle through his defences before striking the castle. Thankfully, you can build shields, which can be positioned to protect your guns and other buildings from the enemy. There are a couple of good gameplay mechanics in play here which not only keep you focused and playing the whole match without respite, but stop you from just ‘goal hanging’ and plonking a turret right next to your opponent’s castle.

Firstly, you can only build within your own sphere of influence. This emanates from your castle into the surrounding area, represented visually on the screen by a coloured circle. You can extend the range only by building hot air balloons, which float on the spot you build them, each one having it’s own are of influence in which to build. Like everything else, building these costs resources. Do you increase your buildable area? Upgrade a turret? Shield your mines? With everything happening in real time, battles can become tense and you’ll find yourself changing your plan on the fly. Everything’s alright, until that mine you’ve forgotten about gets blown to smithereens and your cannon sinks into the sea.

Secondly, apart from the mines collection or resources, everything is handled manually. Shield down? Fly your airship over to repair it. Weak turret? Fly over and upgrade it. Want to take an opening to beat your enemy into submission? Wait for the cooldown timer to expire, and fly over and take control of your cannon, aim it yourself, and fire it yourself. Without you in your airship making it all happen, you’re a sitting duck.

For those looking for a solid single player campaign, there’s a very balanced one here with a smattering of plot, and a great learning curve which introduces each mechanic as the levels go on. It’s always you versus AIs of various speed and intelligence, and it’s good fun to play through and never overwhelming. Of course, Multiplayer is the big draw for this kind of game, and competitive same-console matches are really good fun for those looking for a change of pace from Worms.

Achievements:
Things are going to get a bit long winded here, especially for such a niche game. Unless you have a boosting partner, getting 100 ranked online wins is going to be arduous. Apart from the smattering of online ones, it's all about using your different weapons and playing the game.

Overall:
With a decent experience for solo players and funny – if occasionally long winded – multiplayer matches, there’s plenty to pass the time with here. Not a groundbreaking title by any means, but it’s polished, bug-free and looks really nice, uncluttered and bright. Just a fun game to crack out when your mates pop around.