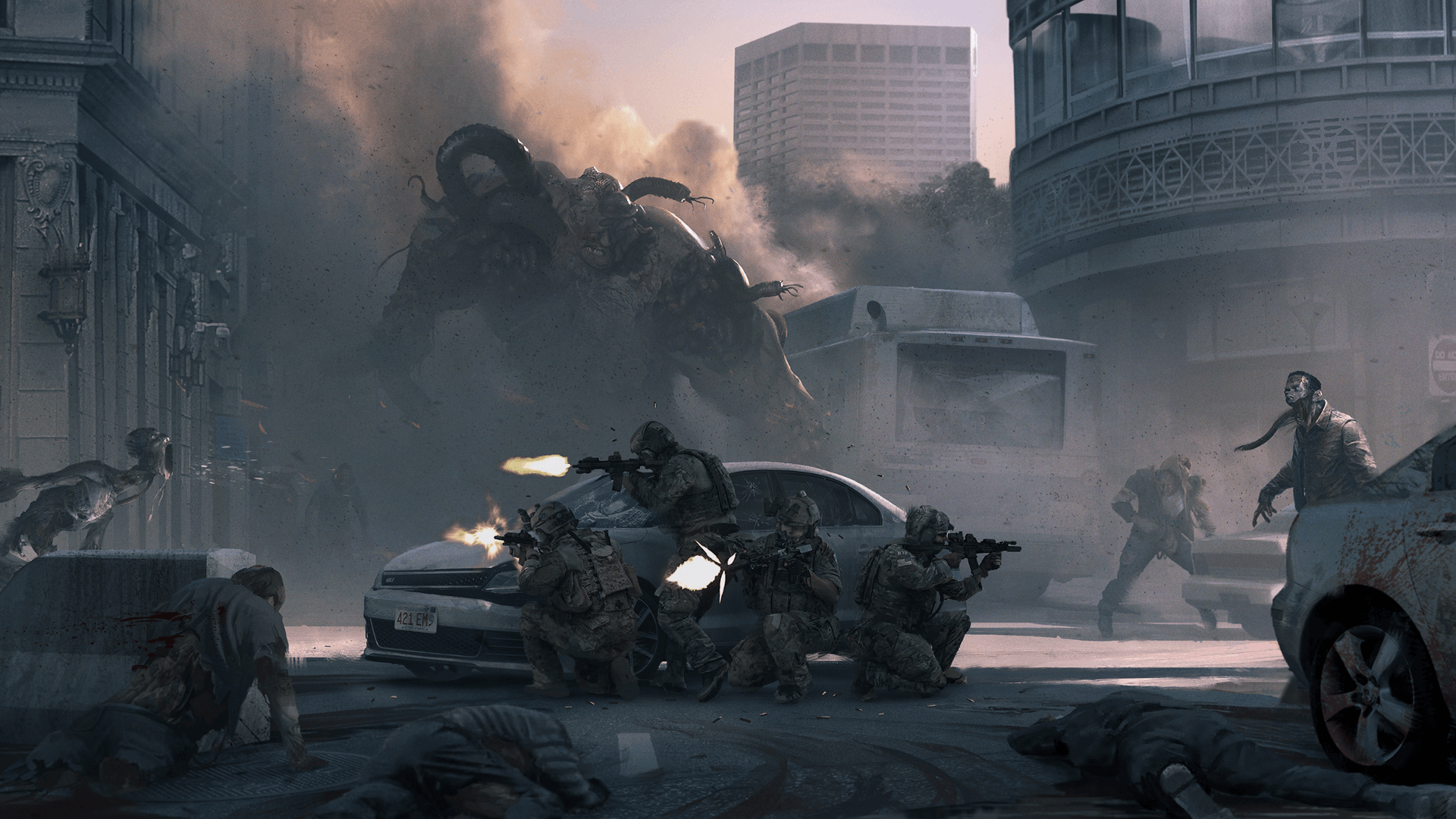 B&C Deadline manages to take great individual components and, inexplicably, ends up being less as a whole.

Intro:
My first experience with Breach & Clear was on the Android platform. A squad based tactical shooter presented from an isometric perspective, feeling similar to a stripped down Xcom, it had you storming buildings and alleyways across a selection of urban locales. Playing as a SWAT team and taking down the bad guys, it was quite the serious game: You planned out your moves in advance, a little like the original Rainbow 6, and then executed them in simultaneously resolved tactical battles. It’s well worth a play if you can pick it up – it holds the title for rarest physical PS Vita game in the world, with only 1500 copies made.

Fast forward to 2016 though, and we have the Xbox One version of the sequel: Breach & Clear Deadline. And it’s a very different game.

Review:
First and foremost, I have to bring news which fans of the original may baulk at. B&C is no longer grounded in reality. Now, with Xcom, you know you’re going to be blowing away aliens before you’ve even taken the display box to the till. However, seasoned SWAT fans may not be expecting to come from an anti-terror tactical shooter into a zombie slaying experience with twin-stick tendencies. That’s right: Deadline sees you re-killing the undead. There are human opponents too, but for the bulk of the game you’ll be putting corpses into the ground for their second time. Mission structure is also very different, foregoing the tactical preplanning of the original game and opting for a more live fly-by-wire approach.

In real-time, you roam around a fairly open and sizable playing area, even collecting side quests and directly controlling your squad member (this is where the twin-stick elements come into play). However, as soon as you reach a combat zone, the game goes back to it’s more turn-based nature. Unlike Xcom though, you have the choice – with a tap of the left bumper – to manually pause the action in order to give instructions to your men, or play out the entire encounter via the live action twin-stick controls. This dual approach makes it feel more like the original Dragon Age: Origins combat. Except with automatic weapons.

To be honest, the way the encounters work is quite refreshingly brilliant. When using the turn based controls, you have all the time in the world to queue actions for your four man team. A simple tap of the D-Pad cycles through the soldiers, and then it’s a case of moving the cursor with your left thumbstick to where you’d like them to go. Preferably, this will be into cover, highlighted by a little shield icon when hovering over debris and objects in the scenery. You can queue up your actions in this way, as selecting a new task for the same soldier doesn’t replace your original instruction; deletion through the B button cancels your last choice. So, you can select a team member while the action is suspended, order him to take cover behind an abandoned car, select to throw a frag into a building ahead, then lay down suppressing fire on the doorway. All of his actions will be completed in sequence when time begins to flow. They’re not imbeciles either, as a lack of instruction will have them fire at the nearest threat with whatever weapon they have equipped, so you don’t have to worry about micromanagement.

Now comes the really clever part. I mentioned back in the first paragraph that the combat is simultaneously resolved. Unlike pure turn based battles such as those in Xcom or Omerta, your actions and the enemies happen in real-time. At any point during the fight, you can hold down your right trigger to advance time. Pull it all the way and time flows normally, or use varying degrees of pressure to slo-mo your way through a particularly busy fight. This works fantastically, allowing you to react immediately to new threats as you would in real life. A huge throng of zombies suddenly burst through a barricade? Cancel your suppression fire and advancement orders midway, and retreat to safety and a better angle. It’s really clever, it’s really intuitive and it allows you to be constantly engaged in the fight, rather than just watching animations play out post planning phase.

As you make your way through these fights, traversing fairly large open maps and unlocking fast travel and safehouse points as you do so, you’ll also come across smaller scale enemy invasions. The game doesn’t automatically put you into ‘command mode’ here, giving you the choice of whether or not to use it by pressing the left bumper. Usually, it’s safe just to hold down the left trigger to bring up your weapon, aim with the right thumbstick and pulling the right trigger to blow enemies away without using commands. Throughout the whole game, whether exploring or in a mission with dozens of enemies, you’re free to approach battles however you choose, with a hit of the left bumper.

All of the above sounds really good, I know. And it is, it’s well designed, it’s a unique approach and it’s fun. There’s something I haven’t touched on yet though: The technical aspects holding it all together.

When B&C Deadline launched, it was riddled with bugs. Since then, there’s been a sizeable patch released to fix these, and true to the developers word, they have. It’s still far from perfect however, due to one really annoying aspect: The frame rate. It’s choppy and unstable even when just moving across the street. On generation eight consoles, it’s simply unforgivable. It’s painfully slow at times, particularly in large fights, and makes playing the game outside of command mode a real chore. The patch seems to have done nothing to rectify this at all, and it detracts from the experience mightily. There are also some parts of the game which are really boring, such as exploring the open map between missions. Your squad moves very slowly, and thanks to the overhead view and an inability to zoom out very far, you can often find yourself walking into a dead end and having to painfully backtrack. In real life, from your perspective you’d see it coming a mile off, or you’d be able to just leap over the Armco by the road. Not here though. Exploration, rather than inducing excitement a la Wasteland 2, just brings tedium. Couple this with terrible sound effects and an average musical score, and running around looking for stuff just isn’t very fun.

There are redeeming qualities which offset all of this, other than the excellent commander mode. You can build your squad from scratch, naming the team and its members, and giving them individual roles which have their own skill trees. Think Medic, Ranger, that kind of thing. As you gain experience from completing missions and killing enemies, you can unlock further skills along those trees to gain new abilities and enhance old ones. Even weapons can be customised and renamed, making it all very personal.

Achievements:
Fairly straight forward, but a relative grind. You'll be killing "[amount] [monster]" quite a lot, and you'll have to play your way through hundreds of combat stages. It's not difficult, just grindy for the type (and quality) of game it is.

Overall:
I’m feeling very ambivalent about the gameplay. Breach & Clear: Deadline has plenty of good ideas, and with a bigger budget could have been really good. Everything from the customisation to the command mode is great. It’s just, with the terribly bland sound, bad frame rate and boring between mission exploration, waiting for the next battle to occur just feels painful. Unlike my verdict when reviewing Lifeless Planet, B&C Deadline manages to take great individual components and, inexplicably, ends up being less as a whole.