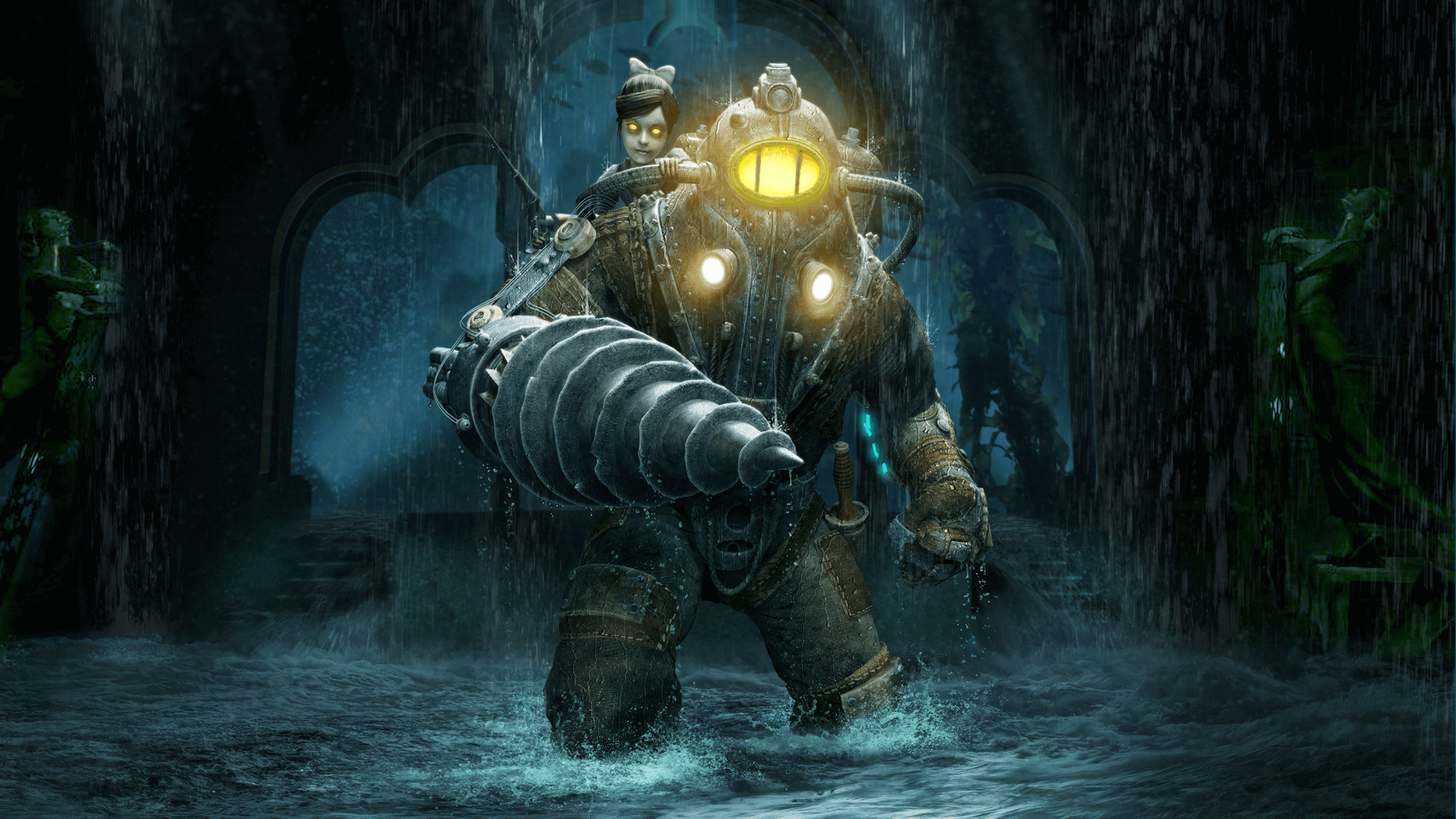 Iconic. Groundbreaking. Peerless. Unmatched. Would you kindly go and download this right now?

IMPORTANT NOTE:
This review covers the remastered BioShock Collection as a whole. That's all three (as of 2022) games.

Intro:
It’s hard to imagine the Xbox 360 before 2K’s BioShock. Like Bethesda with Oblivion before it, BioShock was a landmark release which went on to define the seventh console generation. Outstanding graphics, story and atmosphere bolstered the superb plasmid/firearms experimental gunplay, leaving players with an experience unlike any other. At a time when the market was saturated with World War II shooters and countless average EA titles, Irrational Games came out from the shadows and handed us a masterpiece of pure, gaming genius. Two sequels followed, both as equally well received, and – as is the tradition with this eight console generation – they now find themselves remastered into one package. It’s time to step backwards, and indeed forwards, to discover what made them so special and see if they deserve a place in your Xbox One collection.

Review:
The first game sees you playing as a man called Jack, the only survivor of a plane crash out at sea. Making your way towards a solitary beacon of light, you swim around the wreckage of the doomed aircraft before entering a lighthouse and taking a bathysphere down into Rapture – an underwater city. Created by Andrew Ryan, Rapture was seen as a utopia where men only had to answer to themselves. No governments or gods would take away the earnings of your hard work. No taxes, no sin – a place where you reap your own rewards of your own hard work. Without spoiling the story, it’s safe to say things went rather awry after the discovery of ADAM, a substance which is capable of genetically modifying a persons DNA. This is how the Plasmids are created, and how you – and your enemies – get your powers. Adam is a highly sought after commodity with terrible side effects, to the point where it causes people to riot and kill to obtain it.

BioShock 2 introduces a new player character, Subject Delta. Subject Delta is a ‘Big Daddy’, a protector and engineer in the underwater city of Rapture, searching for his ‘Little Sister’ – an orphaned child, genetically engineered to retrieve ADAM from the corpses which litter the city. She is missing, and as her assigned protector you set out to search new areas of Rapture for her whereabouts. BioShock Infinite keeps the gameplay of the first two titles (although plasmids are now known as vigors), but transports the entire experience to a floating city above the clouds. As private investigator Booker DeWitt, you are taken to the metropolis of Columbia with little back story and only one instruction to go on: Bring us the girl and wipe away the debt.

All three BioShock titles play out as smart, tactical first person shooters. They each combine steampunk influenced technology and weaponry with the ability to wield super powers of a sort, known as Plasmids in the first two games and Vigors in Bioshock: Infinite. Combining the use of your powers and your weapons is the key to taking out the enemies found in all three games, and is paramount on the higher difficulties, which I heartily recommend playing. This presents some amazing emergent gameplay: See two enemies running through a pool of water? Zap the pool with your electrical plasmid to stun them and deal massive damage, then turn around and freeze the guy running up behind you before shattering him with your shotgun! All three titles present their shootouts in environments which allow for a fantastic range of freedom in deciding on the best way to despatch your enemies, and the gameplay remains compelling from the first hour of BioShock to the final moments of Infinite.

The oppressive, tightly packed underwater city of Rapture featured throughout the first two titles contrasts starkly with the bright, colourful and open areas found throughout Columbia in BioShock Infinite, and this is a good thing. As fantastic a realised place as Rapture is, asking the player to wade through it for a third time may be hard going. Remarkably, BioShock’s gameplay translates equally well into both environments, and all three titles remain a constant, unwavering 60fps throughout. Some elements haven’t aged particularly well in the first two titles, such as the lacklustre weapon sounds and the lack of motion capture during cut scenes leading to cartoon-like animations, but by the time we reach Infinite, things have been refined and polished to a clear shine.

Beyond the gameplay (fantastic) and the graphics (amazing, especially Infinite), I need to talk about the voice acting and story. Both are simply outstanding. A lot of the back story in all three titles is given out in the form of collectable audio logs, and every single character who appears on the recordings is fantastically voiced by the associated actor. Every single performance given throughout all three titles is just incredible, and goes above and beyond simply saying their lines. Insane characters are brought to life with believable gusto, and credit must go to the actors involved for helping to create such an amazing atmosphere. Even the Splicers – BioShock’s generic enemies – have wonderful talent behind them, especially when they are unaware of your presence and just muttering insanely to themselves. Top this off with three great scripts and an overarching plot which the likes of H G Wells would be proud of, and you have not just a great series of titles with brilliant gameplay, but the plot to match. No McGuffin, no filler, just fantastic story telling.

Achievements:
Pretty much as they were upon their original release, which means you'll be playing through the games multiple times to reach different endings and using different techniques along the way. You'll also need to master the challenges of the extra modes and DLC, and get the collectibles found within all three games.

Overall:
All three BioShock games come with their original DLC content, from challenge rooms to extra story chapters, and fans of the single player portion of BioShock 2 from the first time around may be pleased to know the PvP multiplayer has been completely omitted from this release. What we have here is three full games and DLC packed with single player story content and extra modes which focus on the addictive gameplay, and the package is all the better for it. Couple this with unique extras such as an actual playable, hand built museum featuring concept art and 3D models, and the ability to discover new collectable reels in game which provide director’s commentary, and you have much more than a re-release with an unlocked frame rate. You have an actual, genuine remaster. Other developers should take note, as 2K shows the world how it’s done. Of course, it helps that they have three of the best first person shooters ever made to work with.

Iconic. Groundbreaking. Peerless. Unmatched. Would you kindly go and download this right now?