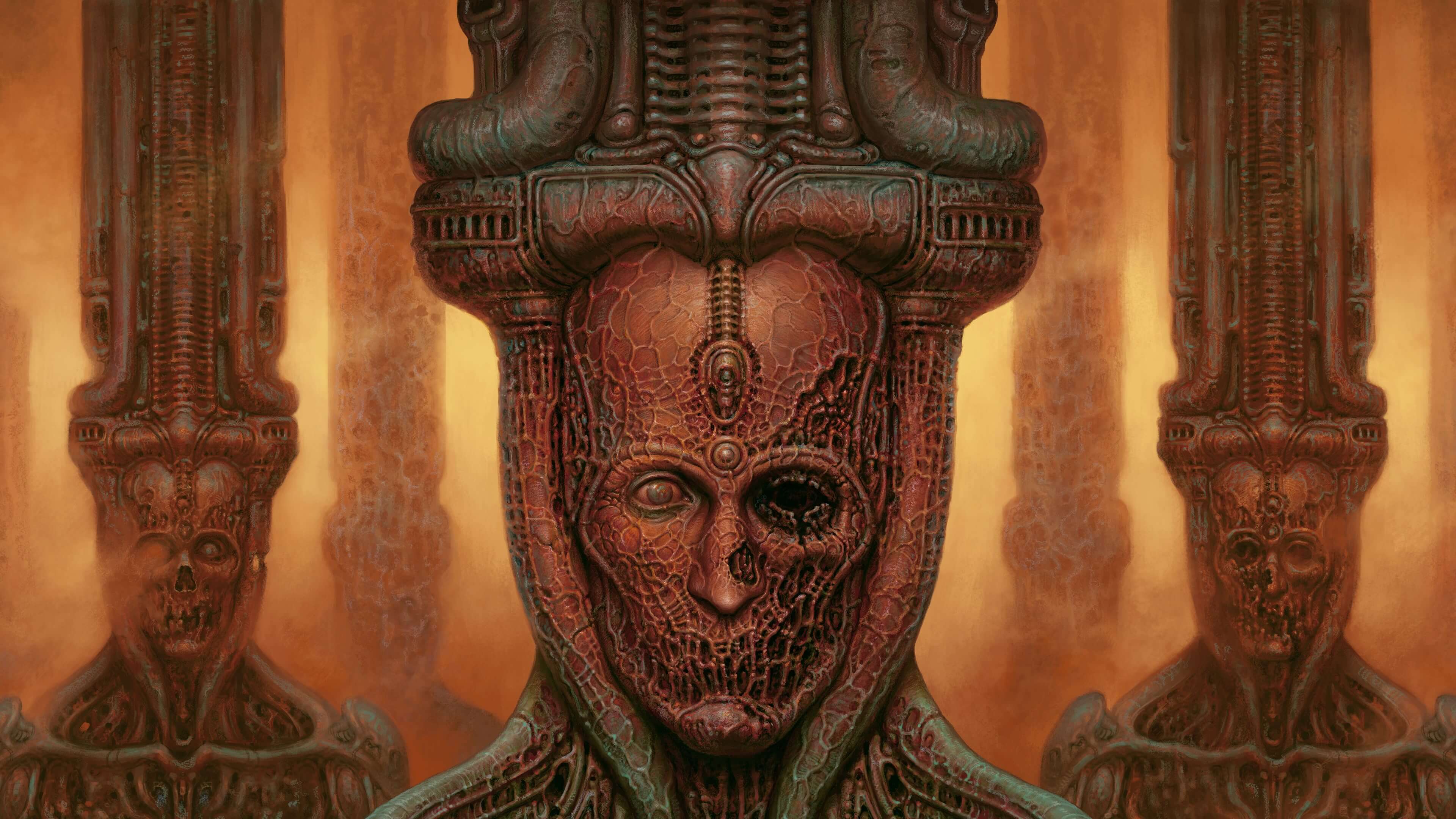 Intro:
Whatever you are, you're alive. Sentient. A free mind, tearing your physical body from the biomechanical heap you have grown from.

Rising from the floor, you take in the alien landscape before you: A building of some kind; a craft maybe. Walls of bone, yet steel and stone, surround you. It feels as though you're in the bowels of some giant creature, yet the creature is made, and part of the land.

So you do the only thing you can do.

Review:
Scorn is a first-person puzzle game, set in a Giger-esque world of biomechanical beings and structures. Each act of the game - five in total - sees you solving smaller puzzles around a unique landscape that all form part of one larger puzzle, which is required to be solved to move onto the next act.

There is a story here, but it's told through your actions and progress rather than explicitly laid out for you. It is very obtuse, though - even after finishing your first playthrough, you'll only have a marginal grasp of what's going on unless you take the time to absorb every bit of environmental storytelling as you go. And you really should, because Scorn looks and sounds fantastic .

For those unfamiliar with the work of H.R. Giger, think machines melding with people, working as one physical unit, each part of the machine intrinsically linked to a part of the body. Smooth curves give way to fine lines as the two halves perfectly integrate into one being, becoming more than the sum of its parts. It's also oozing with sexual imagery - the melding of the two separate entities is often implied to be a pleasurable one for both parties. This latter identifying mark of Giger's work doesn't really take root in Scorn's world until near the very end, but rest of the game is brazenly Giger in every way apart from that.

The developers have done an outstanding job of rendering the biomechanical aesthetic as a 3D space waiting to be explored. It looks phenomenal in the best-in-class Unreal engine. Not just the meshes and textures, but the volumetric effects, lighting and animation really bring the horror of the world to life.

The aesthetic isn't just a visual showcase, either. It's integrated into the gameplay in fantastic ways, from the way your inventory works to the way you upgrade equipment and even reload your weapons (yes, there's combat in Scorn, but it's brief and irregular. More of an irritant than a feature).

Puzzles are integrated into the environment as well. None of the mechanics are particularly revolutionary, or even original to be honest. Strip away the levers, buttons and structures and what you're left with is a basic block-sliding puzzle, or a getting a ball through a maze puzzle. But it's the things layered on top, it's the environments themselves which make them feel unique. You see Scorn is a physical game.

You collect an item, and you're carrying it. Full body awareness means you can look down in first person and see your hand actually carrying the object - not just floating in space or tucked away in a menu somewhere. Interact with a lever in the environment, and your hands grab it. Fingers go into holes, hands go into gloves - even reloading a weapon sees you plucking ammunition from an actual container on your body, inserting the "bullets" one by one into the weapon. Everything is tactile, felt and experienced and it's something which really pulls you into the game's world. A world which is often macabre, often bloody, and sometimes horrifically violent.

The sights and sounds in Scorn aren't for the faint of heart. To progress through the game, you'll have to do some bad things. Lives will be lost, beasts will be tortured and bodies will be destroyed. One sequence near the beginning of the game, something I'll call "The Chair Puzzle", made me feel awful. Without hyperbole, a game has never made me feel like such a bad person as solving that puzzle did. Another sequence near the end, unavoidable if you want to finish the game, had me feeling almost as awful.

If you want to experience everything which the game has to offer, you can't shy away from these experiences - you have to embrace them, because the horror of the acts you must perform are your only salvation. They are, for want of a better word, the only way to "win".

Achievements:
Very easy. There are only a dozen achievements, and you'll unlock all bar one of them on your playthrough without a guide. For the remaining one, you simply need to restart the game and choose a different solution for "The Chair Puzzle". It took me around 7.5 hours to 100% Scorn with no guides of any kind.

Overall:
Every reviewer's experience is subjective. A review can't be anything but - The person reviewing, their mood and emotions and even their environment, all help to shape the experience they have with the subject.

If you enjoy games such as Myst and Riven, love sci-fi, horror and gore, then you'll love Scorn as I did. If the idea of a first person puzzle game set in a hopeless and violent alien world is your idea of hell, then you'll hate it from the get go. I ask you bear that in mind when seeing my final score. For me, Scorn is a ten out of ten.