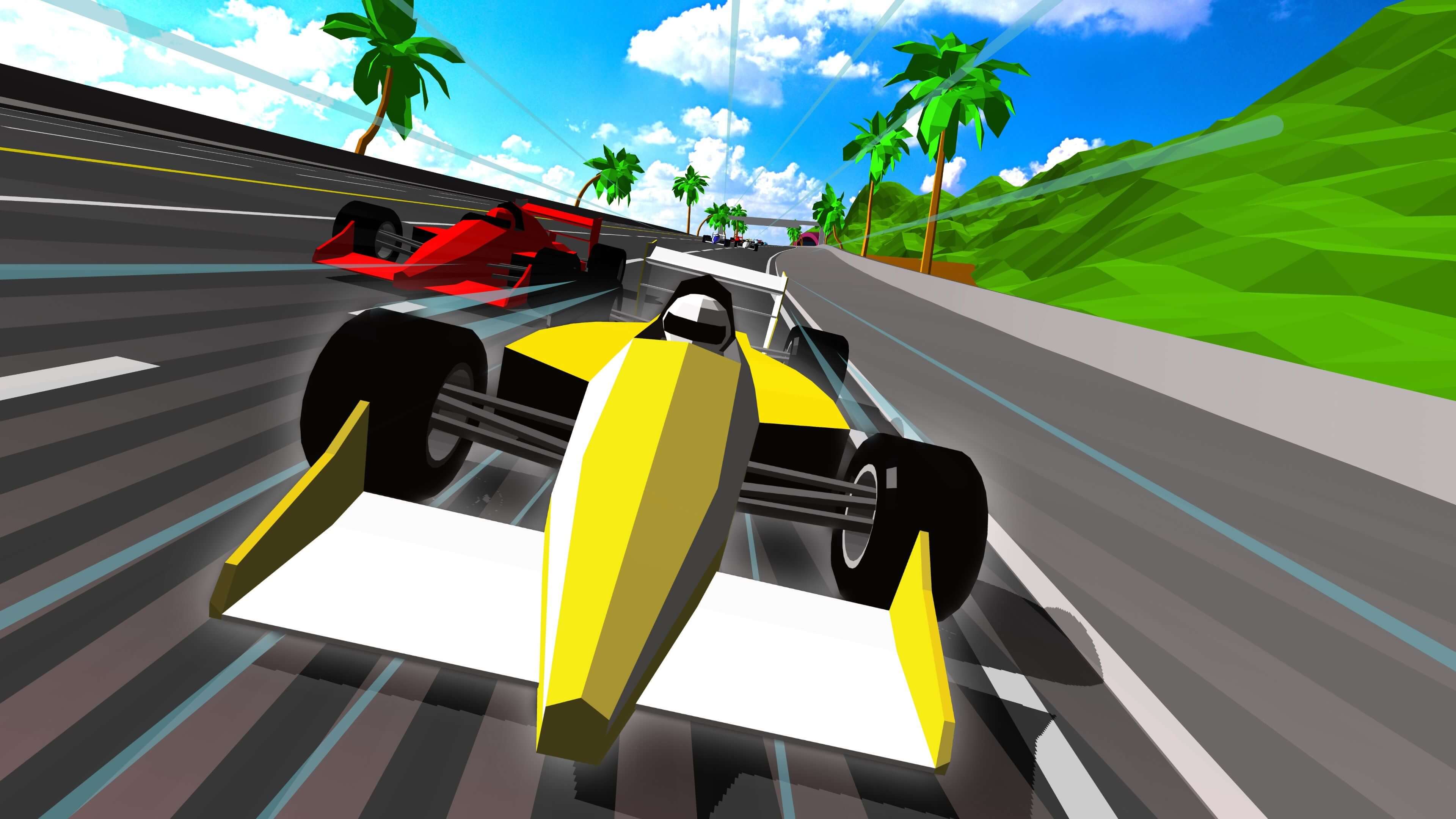 Gentlemen, start your engines! Then run as far away as you can before everything explodes.

For those of you of a certain age, I know what you're thinking: Virtua Racer for a new generation! Just like the Mega CD promised all those years ago, it's the arcade in your bedroom!

Virtua Racer was good, but it was always overshadowed by Daytona USA in my book. It looked better, played better, and was more impressive overall.

Formula Retro Racing... Well it handles easy, and the crashes can look relatively spectacular in multicar pileups. But that, my co-drivers, is it. Pretty much every other arcade racer on the Xbox looks better, plays better, and is more impressive overall.

It's not the low poly art direction, it's the not the almost none existent engine noises, it's not even the uninspired public domain music. It's the gameplay itself, and the content where that gameplay lies.

There are three game modes: Arcade, Elimination and Free Practice. The latter is simply a solo drive round a track, as you can imagine. Arcade mode sees you picking a track to race around, and then selecting a difficulty. You do a predetermined number of laps whilst racing for position, after which you are awarded points based on the difficulty chosen and where you finished. The points don't go towards a championship - there isn't any such feature - they simply add up, and when you reach certain milestones the last three our four tracks unlock themselves. Elimination is the exact same racing on the exact same tracks, except you have to stay above tenth place to stay in the race as the opponents get faster and faster. You get points at the end based on how many laps you completed before either falling asleep, or exploding into the sun as you're gently brushed by an opponent's front wing.

You get a staggering eight tracks to torture yourself around (no reverse courses for some reason), some of which are so short one lap lasts less than thirty seconds. You can select your car from a whopping roster of one. You do get to choose which garish colour scheme you want for it, though, so your blue and orange catastrophe stands out from the other rainbowed monstrosities that'll be out to sabotage your every lap.

And that's where the real problem lies. The amoeba level artificial 'intelligence' of your opponents. You'll be in the slip stream of the car in front, pull out at the last minute and have it decide to slam straight into you as you do so. Other times, you'll be bearing down on an opponent and line up side by side for a clean overtake, and they'll just steer hard into you, leaving you uncontrollably spinning into the barriers. Sometimes the opponent will attempt to slipstream past you, but instead of pulling out at the last minute, they'll just plough into the back of your car as their single brain cell packs it's bags and moves on to pastures new.

It wouldn't be so bad, but seemingly your car has two states in this game. You're either completely undamaged, or you're a survival cell barrell rolling through the air as your wheels and wings are catapulted into orbit.

Thankfully you get respawned within four or five seconds at the place you were obliterated, and sometimes you'll even be facing the right way, instead of staring into the eyes of 19 deadly missiles travelling at 300kph in the opposite direction, every one of them asleep at the wheel.

And if you manage not to crash, if you manage to go an entire lap avoiding the world's worst racing drivers, priding yourself on your cat-like reflexes and split second decision making to reach the end of the lap unscathed, well the developer has taken care of that for you too!

Enormous opaque yellow text declaring CHECKPOINT REACHED and your lap time will be plastered across the dead centre of the screen, acting as a curtain between you and the track no matter which view you race in.

Oh, and I've just remembered! Twice, my car came to a dead stop in the middle of the road. No deceleration, it was just suddenly, immediately stationary. Only thing I can assume is that it somehow collided with the track geometry, but there was no crash or anything.

I know what you're all thinking: "This looks pretty good! I remember Virtua Racer!" Maybe even "I've played a race and it's not that bad".

Come back when you've finished the achievements (which are all really easy, assuming you can get through a race alive. It'll take you about three hours). Then tell me you still feel the same.

Gentlemen, start your engines! Then run as far away as you can before everything explodes.