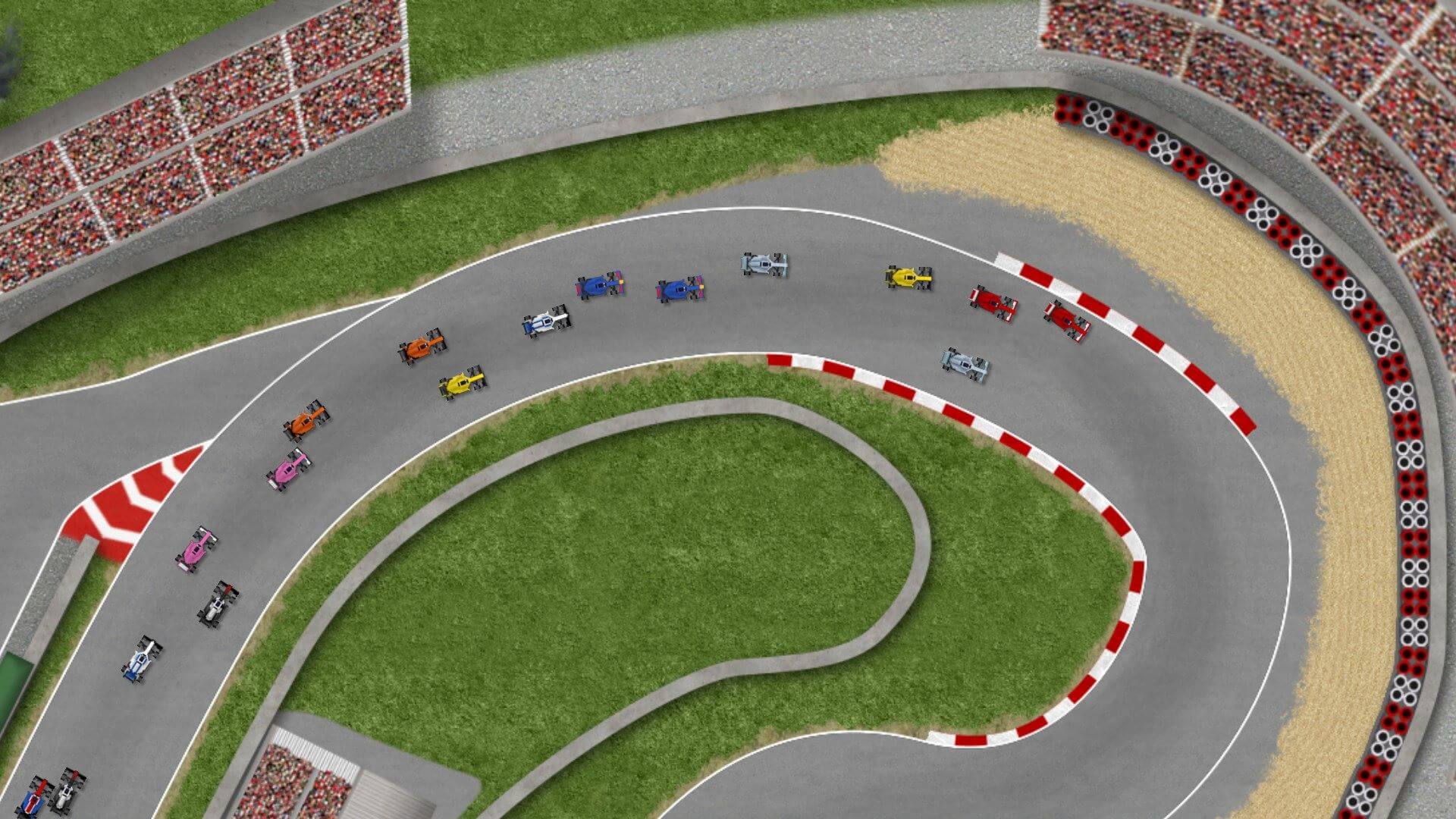 Some fun for fans. Everyone else: Steer clear.

Well of course this isn't the ultimate in 2D racing. If it was, it wouldn't need to claim as such in the title, which is the kind of name you come up with when you've just completed your first video game and you think you're the next Cliffy B.

As a top down racer which lets you drive everything from forklifts to Formula 1 - sorry, A - cars, It's surprisingly in need of some personality, which hardly ever shines through. It looks pretty insipid too, with each track being a completely static artwork approximating a real life circuit from around the globe.

Badlands, Racing Destruction Set, Micro Machines, Ivan Stewart's Super Off Road, Super Sprint, Skidmarks, Grand Prix Simulator 2... Pretty much every top down racer from the eighties and nineties is more fun and has a clearer identity than this, with it's all too similar handling models and horrendous sound design, almost invisible presentation and uninspired career mode. But it does have it's moments, so let's look at them.

Some of the racing can, sometimes, be fun. One game mode - Event Mode - sees you working your way through preset challenges, and a handful provided some genuinely entertaining racing. 20 cars on track, doing 6 laps around a circuit where it rains then dries then rains... Everyone scrambling for tyre changes, hitting each other in the pit lane, back markers pulling over to let you through on your superior strategy. When those moments happen, you'll swear something's clicked and you finally get what the developer intended. Then, all too soon, you'll be back in the next challenge and it's back to the run of the mill uninspired driving.

There's a mode where you are supposed to use prize money to work your way up through the ranks of different teams, but it amounts to little more than picking the fastest car you can afford, winning, then doing it again. Every vehicle handles the same, with only the level of grip and speed being any different. Motorbikes and Combine Harvesters have the exact same turning circle. They also go through their tyres at the same rate, and take the exact same amount of time in a pit stop.

The game also suffers from the usual top-down issue of tracks being way too short. You can do a lap of a go-kart track in 7 seconds. The longest track - Nordschliefe at the Nürburgring, some 22.4km - can be driven in 59 seconds in a tractor, making the average speed of this traffic jamming favourite some 849mph. No, there isn't a decimal point and yes, I have mixed metric and imperial. The game doesn't care, so why should I?

Achievements
Achievements wise, they're easy but it's a bit of a grind for the last one. You'll need to win on the hardest difficulty, qualify first, and complete 10 seasons of racing. You'll also need to finish the three dozen or so events the game has for you. You'll be looking at between 6-8 hours for a full completion. I do have an upcoming walkthrough for the game though, so watch this space!

Overall
Final verdict? If this game is on sale for less than a fiver and you're a fan of the genre (I am), go for it. You'll have some fun before the grind sets in. Everyone else: