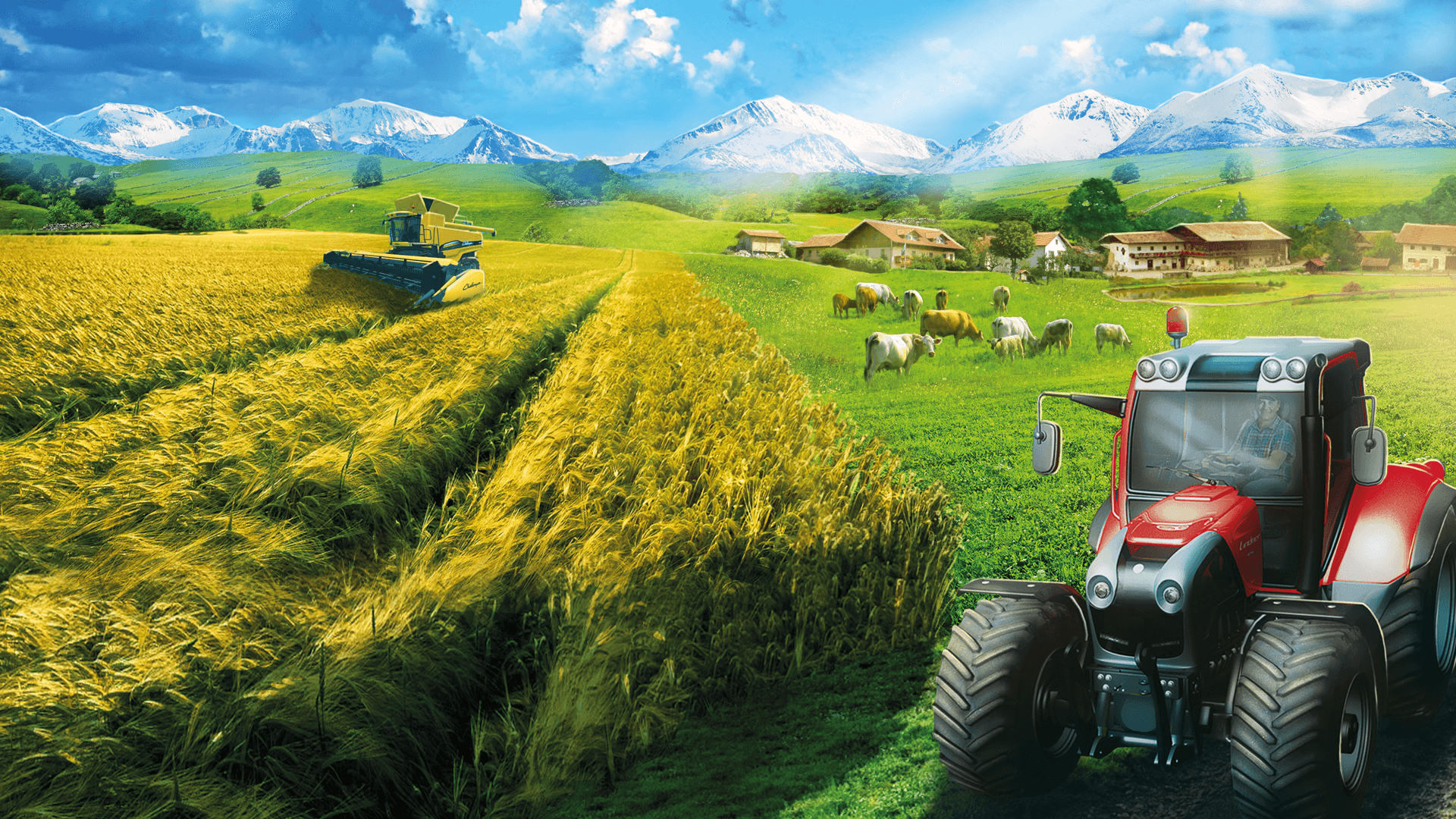 the gaming equivalent of being waterboarded.

Intro
For some people, choosing to play a game about farming would be akin to the rest of us playing a game about sitting bored witless in an office cubicle for eight hours a day. For those of us who aren’t blessed with the kind of job satisfaction you can only get by breaking your back 24/7 and giving most of your profits to Tesco, we have digital simulations to live out the fantasy. Will you find the pot of gold at the far, far end of this muddied rainbow, or will all your livestock succumb to foot and mouth?

Review
There are several approaches to providing a good digital farming environment. You can go for the touch-screen friendly, cartoon farm building sim, swiping your digits effortlessly across tiles of bright, healthy corn, tapping on little buildings to sell at market. You can go for something like Milkstone Studios’ Farm Together, a great Indie Game on the Xbox One, walking through the isometrically viewed fields and doing everything by hand with your friends on Xbox Live. Or, you can knuckle down and make a proper sim. Giant Games’ Farming Simulator series does this really well, especially for a mid-budget studio, and it’s hard to find a reason to try anything else if that’s what you’re looking for.

Still, developer VIS thought it necessary to inflict us with this: A game which markets itself as a serious sim, running around your farm on foot, feeding your animals across all the fields of the ‘open world’ (more on that later). Climb into your tractor, couple up a plough and get tilling those fields! All the things which you can do in Farming Simulator.

Only, this isn’t Farming Simulator. This is Professional Farmer 2017.

And it has no reason to exist.

Everything, from the year in the title to the box art, is led to catch they eye of fans of Giant Games’ series. Now, this in itself wouldn’t be a bad thing if we had a genuinely good game which could do with some exposure, but we most certainly do not.

Let’s talk about graphics. The game genuinely looks like it was made for the original Xbox, released back in 2001. Flat textures and unimaginative assets which could very well be pulled from loyalty free websites. Nothing is to scale: Driving past some houses makes you look oversized, and even the front door of your own farm stands at around chest height. There are some God-rays and moving shadows and breezy trees, all of which I suspect just came built into the game engine.

Let’s talk about physics. That’s easy: There aren’t any. Your tractor controls like a slow radio-controlled car, with extremely simple steering mechanics that essentially just go from full lock to full lock without much in the middle. One of the main features of the game, clamping and releasing various bits of machinery to the back of your tractor, has no effect on its handling at all. I slowly tried what should be a tricky reverse manoeuvre, only to realise I could just reverse at full speed, the enormous water tank I was towing simply rotated sideways and locked its wheels without any hinderance to my backwards movement whatsoever. Most of my driving time resulted in me careening along looking like that liquid nitrogen filled truck in Terminator 2, except with full steering control.

Still on with physics, there are two states for scenery objects in this game which affect your driving route choices: Completely intangible, or impassable and indestructible. Now I’m not saying I want to be able to use the spinning blades of my combine harvester to tear lamp posts out of the ground, like in GTA San Andreas. But if I drive my hulking great tractor at full speed into tiny little chevron marker at the side of the road, I would expect to flatten it, not just come to a stop. There are no crashes in this game. Hit a tree at full speed, and you just stop. No damage, no crunch, no nothing.

Onto the other extreme, which is things without any physical presence at all. Bushes, for example, have no hit boxes whatsoever. You just pass through them. The greatest offender here though is the water: Ponds which you can just drive in and out of, as if they don’t exist. You can park underwater. There are no splashes, there’s no slowing of your vehicle. The water is drawn onto the screen, but without any physical presence. This kind of unfinished, unprofessional laziness typifies the whole ironically named Professional Farmer 2017 experience.

Let’s talk about sound. It can add so much to a game. The eerie industrial noises in Silent Hill. The roar of the engines in Forza Horizon. The noise of battle in Titanfall. The set-piece music in Halo. The generic, mild engine noise and (again probably royalty free) elevator music in Professional Farmer 2017. It’s just plain bad. Not serviceable, not ‘does the job’ – it’s bad. Occasionally you’ll hear the squeal of a pig, or the baa of a sheep, but personally I’d rather fill my ears with mud than unmute the telly. Maybe that’s what the developer did when researching this game? Who knows.

Let’s talk about coding. The engine is badly handled, ugly and generic. Despite the empty roads, complete lack of AI and total absence of physics, the frame rate still manages to tank when you switch your tractors lights on in a built up area. (Read: Area that’s not an open field). When on foot, the frame rate stutters when just stood near some unploughed weeds. It’s pathetic, frankly. The game also lies to your face! It’s not a ‘huge open world’ as its blurb states outright, it is in fact a series of individual maps (the exact same ones every game, mind) connected by loading screens. In a world where The Witcher 3 gives us a true, incredible open world, how have the developers not managed to stream all of this at once? It’s hardly a technical benchmark.

Finally, let’s talk about gameplay! Most of the above could be somewhat forgiven if the game was entertaining, fun, or even just plain silly. Goat Simulator is a great example here: Despite being a ludicrously bad game, the overall experience is significantly more fun than the sum of its broken parts. The same cannot be said here, I’m afraid. Drive to a field with a plough attached, watch a number count to 100 as you circle around it, then do the exact same thing for about six different attachments.

Every action is identical, only the visualisation of your towed machinery is different. It’s tedious, repetitive and even recalling the actions for this review depress me. Out of boredom, I got out of my tractor and walked to the edge of the map. Straight through the boundary, into the snow-capped mountains (???) and fell continuously forever downwards, never being reset to ground level or back at my farm. A farm which is completely non-customisable and identical every game, on a map which never changes, in a world devoid of human life.

Overall
Playing Professional Farmer 2017 is the gaming equivalent of being waterboarded. Horrifyingly bad. Better to die. You’ll beg for it to stop, for the final achievement to unlock so you can put it away forever and forget it exists. It is, in a word, abysmal.