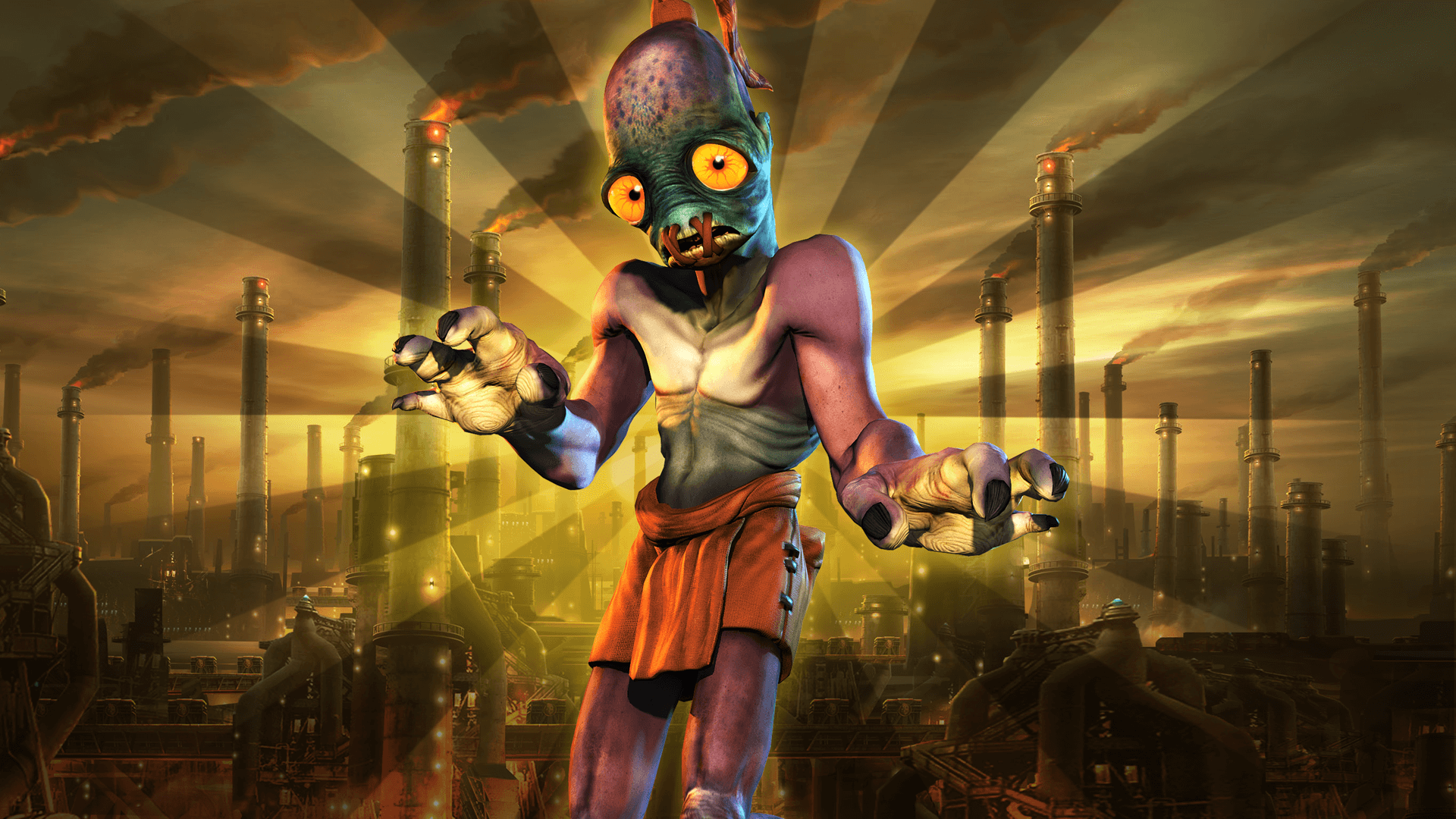 A remake of a legendary platformer, for the no attention span, instant gratification generation.

Intro
Welcome to a world where death is a way of life. A world where mega corporations, run by the greedy self-serving Glukkons, strip the land of it’s resources in the name of profit. A world where huge factories dominate the skyline, pumping black smoke into the air as the enslaved ’employees’ – Slig guards and Mudokon handymen – keep them profitable 24/7.

Review
Welcome to Oddworld. An almost like-for-like remake of the twenty year old PlayStation game, Oddworld represented – and somewhat still does, in this ‘New & Tasty’ form – one of the most original, atmospheric and arresting platformers ever to be built.

We join the story in a huge factory called Rupture Farms. They say it’s one of the biggest meat processing plants on Oddworld, making sweet and savoury products to satisfy the luckier beings who live on this alien planet. Central to the plot is Abe – Floor Polisher and cleaner, like most other Mudokons who work here. Life was nice and simple, until Abe happened to eavesdrop on a board meeting about their latest business venture: A new product, expected to rake in the profits. The Mudokonpop! Made from the flesh and bones of Mudokons themselves!

Abe, realising his simple life is coming to an end, decides to get out, setting of alarms in the process. This is where you come in, guiding our hero through twenty or so hours of near-perfect platforming, rescuing (if you choose to do so) the other 299 Mudokon employees from Rupture Farms along the way. You’ll be avoiding the bullets of enemy Sligs, leaping over landmines, climbing up platforms and trying not to be squelched into bloody paste in the machinery of Rupture Farms.

New & Tasty follows the original PS1 title pretty much screen for screen. The transitions, video sequences, animations and level layouts are almost identical. Bearing that in mind, it seems bizarre that JAW and Oddworld Inhabitants – the new and original developers, respectively – would choose to rebuild all the assets in 3D, using the far from optimised Unity engine. Back in the day, the game used pre-rendered backgrounds and character animations which, apart from the relatively low resolution, still look fantastic today. Updating these assets into super-detailed HD would have been much preferred to using the Unity engine, as the game actually loses some charm and even some detail with the switch to 3D. The platforming action is easier too, as you no longer have to time your actions to animation cycles. You can move Abe as little or as much as you like, making the perfectly timed run and jumps a thing of the past.

Abe’s Oddysee also used a flick-screen mechanic instead of the scrolling levels we have here, which added to the tension and aided the original puzzle design. Each screen used to be it’s own challenge, and although the layout in this updated version is almost identical, it makes the game a lot easier, as you can escape enemies and rescue Mudokons from further away. Combine this with the utterly pointless Normal and Easy difficulty levels, where Abe has health instead of succumbing to one hit death (a mechanic the progression and puzzles were built around) and the challenge is diminished significantly.

It is, however, testament to the original design that New & Tasty is still fun to play, and the groundbreaking Gamespeak – commands such as “Follow me” and “Wait” on the D-Pad, used to rescue your fellow workers – feels as fresh as it did in 1997. Possessing the enemy Sligs, allowing you to completely take them over and use their own Gamespeak and actions, is still a great laugh, especially when deliberately marching them to their death in the grinding gears of the meat processing plant. The way the story flows and deepens is down to the excellent team who penned the original, and it still stands the test of time and compels you to play.

This being the deluxe version of New & Tasty, we get two pieces of extra content included. One of them, following the trend of mostly pointless gaming add-ons, is an extra costume for Abe. Seriously. A 2.5D scrolling platformer, and we get an exclusive Deluxe Loincloth!

While you scrape your jaws off the floor and rub the wonder from your eyes, I’ll cover the second piece of extra content: It’s the brand new, not-in-the-original bonus chapter, Alf’s Escape. Possibly as a result of taking on board comments surrounding the diminished challenge of the main game when compared to Abe’s Oddysee, the team at JAW brought this short, difficult, satisfying piece of DLC out a few months afterwards. You’re still Abe, and you’re back in one of the Rupture Farms Zulags. Half of the chapter consists of reaching Alf, a fez-wearing Mudokon trapped within. The other half has you leading him back to safety through trial and error sections of traveling saw blades and other nasty things out to kill him. Often, you’ll find yourself on different elevations, and trying to keep both characters alive through direct control and Gamespeak is brutal, comical and fun.

Achievements
You’ll only grab a few by blasting through the story on easy mode, as most of them require you to beat levels in specific ways: Escape the opening level without being spotted, don’t set off alarms in the grounds of Rupture Farms, that kind of thing. There’s also one for beating the game in hard mode (basically the PS1 difficulty) while rescuing all 299 Mudokons. Yet another requires you to rescue everyone and beat the game in 3 hours or less – considering my play through took around 20 hours, that’s no mean feat! All in all, the achievements here are a pretty tough challenge. Sadly, there are no achievements for the Alf’s Escape chapter. Or wearing the loincloth.

Overall
Well, let’s get one thing straight: The original Oddworld: Abe’s Oddysee is a fantastic game. It’s follow up, Abe’s Exoddus, was even bigger, even better and even more original and comical. (Possessing your own farts? Oh yes). Both are 5 star titles, even today.

Here though? The simplified control of Abe’s running and jumping, disappointing use of the Unity 3D engine and vastly diminished challenge (even on hard mode you still get loads of checkpoints and infinite quick saves) make Oddworld: New & Tasty a remake for the no attention span, instant gratification generation. The story and charm are still there, and the gameplay is still reasonable. But, as is usually the case, the alterations to bring the remake up to date result in an inferior product to the one released almost twenty years ago. Add to this the fact the “Deluxe” version I’ve reviewed here simply gets some DLC which was already available and a bonus nappy for your character to wear, and paying out again for this version becomes difficult to recommend.